How caution has hurt the parking industry 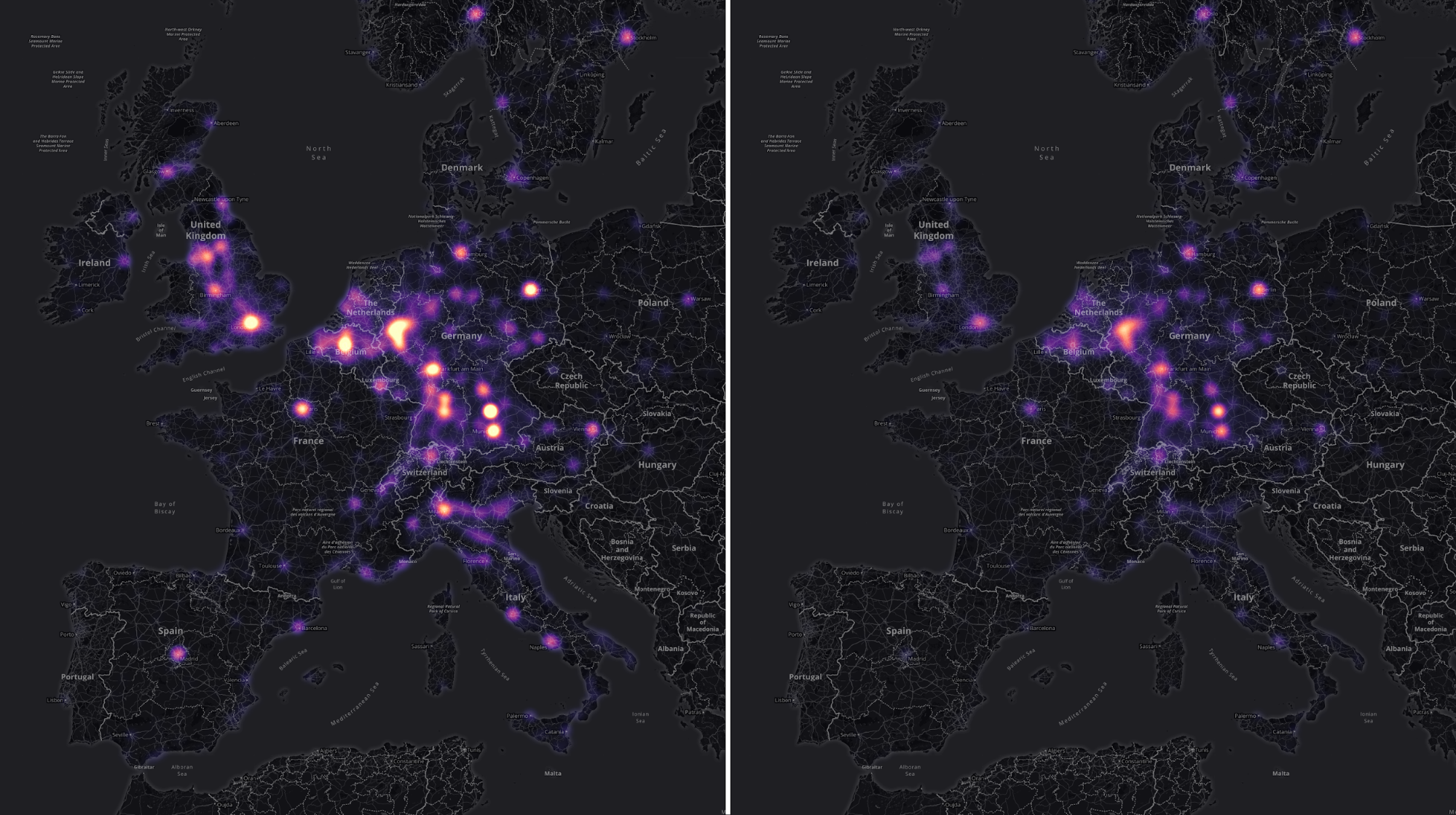 As global levels of COVID-19 increase day by day, businesses across multiple verticals, including parking, are struggling financially with no end in sight for the restrictions on public life. Given that the world had been watching the situation first develop in China, could these struggles have been predicted and prevented?

When cases first started to be seen outside of China, many countries’ governments initially took a cautious, step-by-step approach to contain the infection rates. However, we are now seeing these same countries in a situation of near total lockdown, with high numbers of new infections daily. Questions are naturally being raised as to whether governments acted swiftly or decisively enough to give the public a clear understanding of how and when they could travel, work and socialise.

Parkopedia continuously analyses real-time information related to parking behaviour, such as connected vehicle data, and occupancy levels at parking facilities around the world. The effects of the pandemic have been clearly visible in these data streams.

At a European level, a snapshot comparison of parking events pre and post lockdown shows dramatic changes to the parking occupancy landscape within the space of 4 weeks. For example, the following image shows the number of vehicles that have started and ended a journey, over two 24 hour periods: Tuesday the 3rd of March, when the pandemic was still in early stages in many countries, and Tuesday the 31st of March, with many countries having some form of lockdown in place. 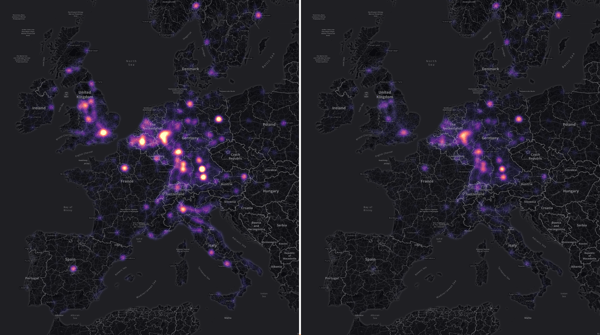 Several details are visible here - both Spain and Italy, two of the most badly affected countries in Europe, have turned almost completely dark, indicating strong adherence to travel restrictions. France shows much reduced activity as well, whereas the UK, whose lockdown started a week later, still shows movement. In Germany, where a nationwide lockdown has yet to be announced, relatively dense activity is still visible, even in Bavaria where a ban on going out has been imposed. When looking at Scandinavia, we see a distinction between Oslo and Stockholm: whereas in the first the amount of parking events have visibly reduced, in Stockholm not much difference can be seen, which reflects the widely reported Swedish policy to refrain from putting draconian policies in place. 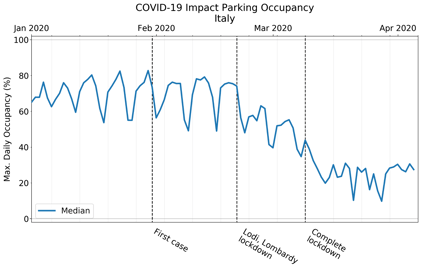 Italy is a country which has seen particularly dramatic rates of infection. Initially, the Italian government only placed travel restrictions on certain northern parts of the country such as the city of Lodi near Milan, Venice and the Lombardy region. This was where we first saw parking occupancies fall, and the decline then accelerated as the lockdown order spread to the rest of the country.

Other European markets such as Germany, Spain and the UK, and even the US state of California initially had a longer pattern of consistent parking occupancy following the first reported case in each country. In each case, this was followed by a more dramatic drop off following the declaration by the World Health Organisation of COVID-19 as a pandemic and travel bans being implemented.

However, although occupancies are now approximately 20% or lower across all these markets, we are not seeing occupancies drop completely to 0%. Whilst there may be a small amount of residential parking involved, the car parks analysed do include those near or at hospitals and transport hubs, so we must trust that it is key workers who continue to utilise parking, and not the public in general. 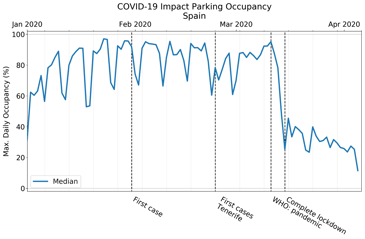 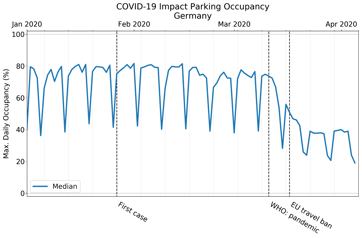 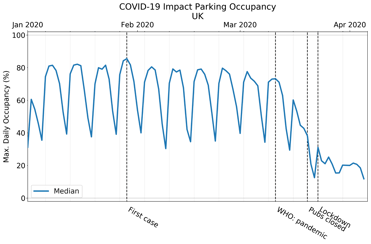 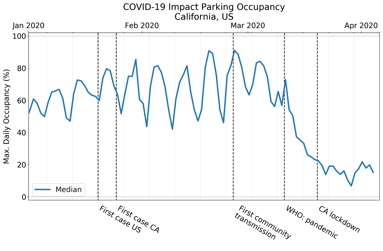 One exception to the pattern globally is South Korea. Despite an initially high rate of infections in late February and early March, the number of daily new coronavirus cases is now impressively low. 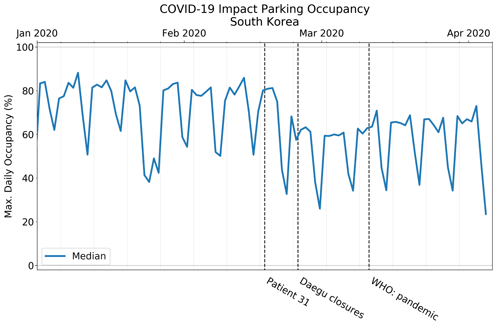 The South Korean government’s swift response to the virus, including earlier testing and frequent public health reminders, has enabled the country to continue to operate without a lockdown situation, and relatively speaking, citizens are allowed to go about their normal everyday lives. Thus, parking has not suffered the same drastic effects as the rest of the countries examined, and average occupancies of 60% have still been achieved.

It is currently unclear whether the experience of travel restrictions and lockdown will cause a permanent shift in mobility behaviours; Uber and Lyft may be less popular if the public have concerns about using other people’s personal vehicles, so the trend away from private car ownership may lessen.

With no end in sight for the spread of COVID-19 across Europe and the US, many parking operator businesses are facing an uncertain financial future until the pandemic is brought under control. Some have already started to furlough employees, and it is likely that there will be a degree of consolidation in the medium term. Longer term, it also provides an opportunity for parking business models to shift towards better use of assets and higher efficiencies in managing those assets, including digitising all processes across the board. One thing for certain however, is that the economic impact of COVID-19 will be seen for a long time after the disease itself has died down.

Learn how Parkopedia is using machine learning and computer vision technology in the real world to...

How good are your probabilities?

Sander van Dijk discusses why and how you should apply the Brier Score and ground truth testing to...